I first fell in love with The Real Housewives of Beverly Hills. I was able to watch the entire first season. But I somehow lost interest during the mid-season 2 and now I heard they are on the 3rd season already.

It’s just funny to watch how these ladies live their life. Sometimes it gets amusingly over the top. The two brunettes in the bunch, Kyle and Lisa, are my favorites.

Kyle is Paris Hilton’s aunt. I love her because she reminds me of my own aunt in Canada. While I love lise because she has this classic snobbish English trait that sometimes border to being funny. I think Lisa’s family has the least problems of them all. 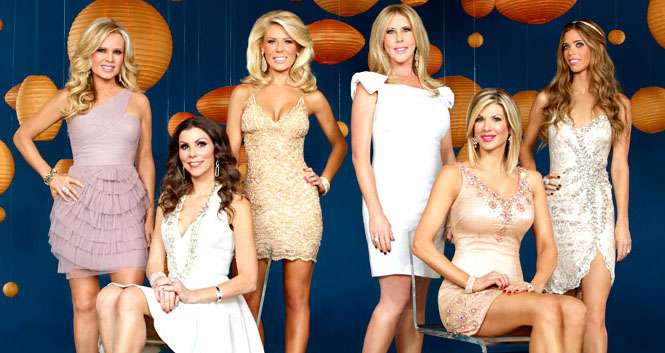 Over the weekend, I was able to finish the last season of The Real Housewives of Orange County. Being the first and longest running The Real Housewives franchise, I thought that this is a good second choice to watch after the girls in Beverly Hills.

The women in Orange County is rich, but not as fabulous than the ladies in Beverly Hills. Equally entertaining, yes, since there’s a cat fight in most of the episodes I’ve watched.

In here I love Tamra and Heather. Tamra’s the short-fused maldita. Her allies, Gretchen and Heather, are the bffs against Alexis and Vicki. Talk about Mean Girls mothers version.

Heather is the professional actress who grew up in the East coast. She’s married with plastic surgeon Dr. Terry Dubrow and now has 4 kids–all so adorbable. What’s cooler than that is I heard she has a net worth of US$4 million dollars and salary per season is US$30,000. I’m now watching The Real Housewives of New York. I’m so curious on the difference of the girls living in the East coast versus the West Coast. I must say, the girls in New York is so much more boring. Or maybe I have not seen much yet (I’m only on episode one of the first season). I really don’t know, but the girls here do not have much pizzazz than those in Beverly Hills. Or those in OC.

I guess I’d have to check out the franchise in Miami next.