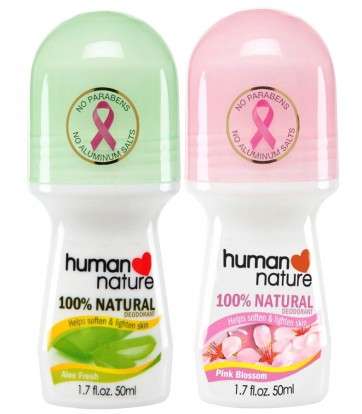 Girls having problems with dark underarms should be thankful with Human Heart Nature. Honestly, I used to have problematic underarms. I’ve tried everything–Dove’s unscented deo, Nivea whitening deo, Garnier’s lightening cream, even having it lasered so I won’t have to pluck or shave. Nothing worked. Until I used Human Heart Nature’s 100% Natural Deo.

Actually, it was my beau who noticed that my underarms are so fair and asked if I was putting anything on it lately… I can’t think of anything else but Human Heart Nature’s deo. So I guess that’s the answer.

Human Heart Nature’s 100% Natural Deodorant does not contain harmful chemicals that can react to your underarms that can cause darkening. Aside from that, it contains Sunflower Oil that effectively softens and lightens skin. The fresh scent is not over-empowering either (versus the commercially available ones).  So, I suggest you get hold of this product for only a little less than Php90.00 and toss your commercial deos to the bin.