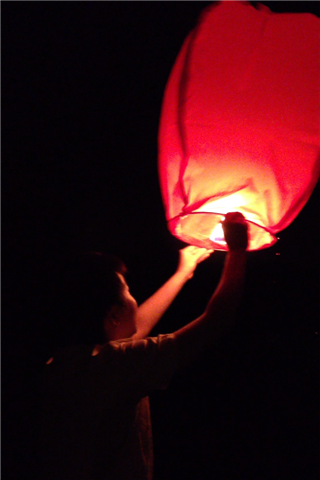 Sky lanterns became an “in thing” after Disney’s Tangled came out. Prior to that, I bet no one in this country ever really bothered about sky lanterns.

The photo above is actually a photo of my boyfriend letting a sky lantern float during last year’s Lunar New Year in Antipolo. We got ours from Regina’s Greenhills at Php 50 each. We bought 5 sky lanterns, 3 of which we let go during New Year’s 2012 and 2 were set loose during Lunar New Year 2012.

Our first lantern was a success, it flew straight to the sky. Our second lantern was a failure though, it got caught up in one of the tree branches, which scared us all. I seriously thought we were going to set a fire in UP football field that night. I was a bit panicking already and the roaming security guard was already there on stand by. Luckily, the fire in the lantern died down before causing further commotion. So much for my New Year’s wish that night plus I was so embarrassed from the gay couple who was there to witness it all. (-_-‘)

Although there is something whimsical–and maybe romantic–with these sky lanterns, little did we know that these floating lamps are very dangerous when not handled properly.

The recent fire that look down the houses of San Juan residents during Christmas morning was said to be caused by stray sky lanterns. One of my blogger friend was affected by this tragedy. Just two days ago, I learned that two personnel from ICA school was also affected by this San Juan fire.

The most recent fire caused by these sky lanterns were during New Year’s in Quezon City:

In one incident in Quezon City, a sky lantern was suspected of having caused a fire along Commonwealth Avenue. The fire developed along Pag-ibig Street, affecting 15 houses and destroying an estimated P300,000 worth of properties. According to investigators, residents reported seeing at least 10 sky lanterns landing on their roofs before the fire started past 1 a.m.

I guess everyone has to be responsible enough to know that anything that has to do with fire is very dangerous. And so, sky lanterns are best set loose in an open space and not in a crowded area like in a residential neighborhood. You can not risk another person’s life with your personal Tangled-driven sentiments.

I remember when Banchetto organized a sky lantern event last 11-11-11, a handful of my friends–including I–got so excited about it and raced to be part of their registration list. People were tagging each other on Facebook about this event. I remember seeing most of my P&G friends saying how they wished they could join the event. The event never pushed through though, to which I already forgot the reason why.

The government did really well this year in encouraging people to veer away from firecrackers. I’m sure the casualties related to firecrackers recorded this year improved greatly. Sadly, sky lanterns caught them by surprise.

To the people who are still lured by buying sky lanterns, just make sure to keep in mind your safety first. Be sure to go to an open area like the beach or a football field to have your sky lantern float away.